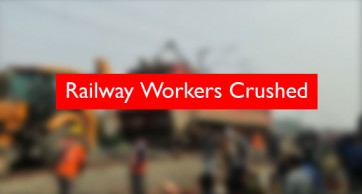 The incident occurred near Kothapalli railway station when the workers were applying grease to tracks, police said. A fourth worker was injured.

The deceased were identified as Durgaiah, Pegada Srinu, and Venu. Fourth worker Srinivas had a narrow escape.

The workers apparently did not notice the speeding train and got crushed under it.

Railway police registered a case and took up investigation.